Trending Now
Photographer Yuriko Nakao’s perspective on Significance
Significant 70th and blessed 90th
It was never normal
A Centre for Hope
Three things to ponder on the 150th Anniversary...
The story of a Bocuse d’Or Sri Lanka...
The Spirit of Christmas
The Soul of the Leaf
The 21st Century ritual of High Tea
Tea Indulgence, the past, present and future
A man walks into a bar and ….
Friendship in a teacup
Natural. Magical. Uva 2011 Seasonal Flush.
The Soul of the Herb
A really great day in Kiran
Peace or the postponement of conflict
Business as a Matter of Human ServiceBusinessworthyDilmahEnvironmentEthicsFacts of Tea

The Colombo International Tea Convention 2017 concluded on Friday, elegantly supported by our most accomplished cricketer and commended by several of the international delegates as the most significant gathering of the global tea industry. For many reasons, it was so and the breadth of expertise and commentary that were shared at the Convention was a tribute to the Convention Committee. As the participants brush the sand off their shoes after the concluding Beach Convention, three things should remain starkly etched in the minds of many of the Sri Lankan participants.

First, the incredible opportunity the industry faces as eloquently expressed by several branding and beverage industry experts. Second, the very significant threat to our great industry from climate change and other forces. Third, how debilitating is the disunity amongst an industry that is acutely divided on a very simple but vital point of disagreement.

One of the most perceptive comments at the Colombo International Tea Convention was Bill Gorman’s observation on the ‘race to the bottom’ in price in the UK, which is producing a situation where the greatness of tea is compromised and tea drinkers forced to alternatives that appear to offer what they seek – authenticity, wellness, quality, variety … a beverage experience. But aren’t those attributes that Ceylon Tea so perfectly and uniquely embodies?

There are very few people in our planet who have not been affected by the profound and fundamental changes to our lifestyles as a result of technological advancement, population growth and urbanization, social changes, human health factors, accelerating competition and linked pressures. In this scenario, consumers face unrelenting time pressure but are also driven to products that fulfill certain functions in their 21st Century lives. There is no beverage that is more relevant to our lives today than tea.

Yes, there is RTD, there is Coke and Red Bull and they do sell – in mind boggling volumes. However when it comes to genuine relevance to our lives today, nothing beats real tea (ie. neither infusions or CTC tea), and amongst real teas, Ceylon Tea. The reasons would fill the pages of a book but in summary they are:

Then there is the threat. Significantly from climate change but as countless examples around the world have shown, the solutions exist and as it has been clearly proclaimed since 2005, the cost of mitigation is vastly less than the cost of doing nothing. As an industry we have ignored this reality, and fortunately the threat has been highlighted by none other than our Prime Minister and our very eloquent Tea Board Chairman, then further emphasized by convention speaker Ravi Fernando (INSEAD Business School).

An equal and possibly even greater threat than climate change however comes from division and indecision amongst the fractured Ceylon Tea industry. The stakeholders that were once functionally one – tea plantations, tea brokers, tea exporters – were divided as one group felt they should go it alone and formed a body representing exporters alone. In biblical terms akin to one organ separating from the body to pursue its own, narrow interest. It may be logical and in fact also human for every individual to see matters from their own perspective but when that perspective overrides good sense and greater national interest, it is dangerous. If in France that same folly were to happen, and separation of grower, national and the narrow commercial interest of exporter only to dominate, you can be sure that most of the vineyards in Bordeaux, Beaujolais, Alsace and Champagne would be devastated by now with an influx of cheap, foreign wines for blending and re-export. The exporter cannot advocate change in the industry from their own perspective when that goes against the interests of the Ceylon Tea plantations, smallholders, workers and common sense in branding. 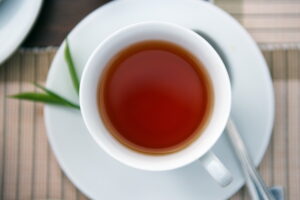 Celebrated for purity, natural goodness, variety, authenticity and rare provenance, Sri Lanka must build on the legacy of 150 years, not desecrate that great heritage.

It is here that the comments of Chairman of the United Kingdom Tea & Infusions Association, Bill Gorman have enormous weight. He explained that in the UK, once the largest market for fine quality Ceylon Tea, quality had plummeted and a ‘race to the bottom’ in pricing was evident, ultimately turning consumers away from tea, and leading to an inevitable disaster for the industry. Like the separation of interests amongst tea exporter and tea plantations, supermarket buyers have their own interests at heart. Given their shorter lifespans in buying roles, they are on a futile effort at survival by showing similarly short term profits to their CEOs. This they do by plundering producers, compromising quality and limiting consumer choice. The long term effect of that is evident, especially in tea, where consumers simply look elsewhere for quality. The retailers have an excuse because most know no other way, but what of the purported Ceylon Tea businesses that want to take Sri Lanka in the same direction?

Basic economics, marketing and common sense confirm that strategy should be dictated by resources. We are a high cost producer, but we have the best, the purest, the most varied teas in the world. To be the cheapest is neither a strategy nor a reality and trying to use Ceylon Tea – with its heritage of quality – as an element in such a plan to sell cheap is not simply impossible, it is also treason. That’s a harsh word but probably appropriate since treason is defined as the crime of betraying one’s country.

Just as surely as trying to carry water in a sieve, the reputation and image of Ceylon Tea that some would wish to exploit whilst using cheaper teas imported from other countries in blends with some Ceylon Tea, would evaporate and, well .. you know what happens next. Authenticity is a key component in the provenance that consumers demand, and compromising that in one short term policy change, would dismantle a brand – Ceylon Tea – that has been built over 150 years. 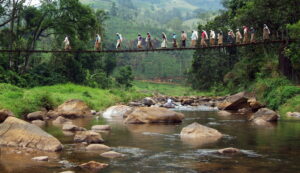 What future for the people behind Ceylon Tea? It must be forward, celebrating the heritage of a great agricultural endeavour and building climate resilience and positive national development outcomes.

Treason is a big word, and big is a very conservative description for the social and political impact that liberalizing imports of Ceylon Tea would have on Ceylon Tea. As for the disingenious comments of several in the pro import lobby, that Ceylon Tea needs to cater to premium and economy segments at the same time, the best response lies in marketing reality and the words of Bill Gorman. You can’t be the finest and the cheapest at the same time.

We are left with the third of the key learnings from the inspiring Colombo Tea Convention. Several times during the 3-day event, speakers called for unity amongst the industry, and that call was echoed by Bill Gorman’s emphatic statement on how the industry was its own worst enemy in fuelling the race to the bottom in price and necessarily therefore in quality. Unity and alignment are critically important if the Ceylon Tea Industry is to overcome the threats we face. However with that unity must come consistency in our offering, our messaging and our policy. Given the economic reality and human context, that alignment can only happen around quality, authenticity, provenance, ethics, goodness – everything the new consumer is asking for, which will also enable us to realistically overcome social and environmental challenges. Then we may finally build a sustainable industry, unite in addressing climate change, and have a glorious industry for future generations to boast of at the end of the next 150 years.

Several in the industry have been vociferously advocating this and have resisted attempts by the less enlightened to permit the import of cheap tea from other origins for blending and export. If any of those who cannot see beyond selling tea cheap, still harbour a desire for liberalisation of tea imports into Sri Lanka after the expertise shared by many during the convention, there was a solution to their perceived problem at the same convention. Packers from Iran to India, ready to pack anyone’s brand at a fraction of the cost they would incur in Sri Lanka – cheaper packaging, cheaper energy,  and unrestricted access to cheap tea. Hands down the best solution. Unless there is some other reason why they may wish to sacrifice the Ceylon Tea industry and the millions of people whose survival depends on Ceylon Tea, around a mirage of vast riches if tea packed in Ceylon were to become cheap. Treason, undoubtedly but in equal measure self serving.