Trending Now
Photographer Yuriko Nakao’s perspective on Significance
Significant 70th and blessed 90th
It was never normal
A Centre for Hope
Three things to ponder on the 150th Anniversary...
The story of a Bocuse d’Or Sri Lanka...
The Spirit of Christmas
The Soul of the Leaf
The 21st Century ritual of High Tea
Tea Indulgence, the past, present and future
A man walks into a bar and ….
Friendship in a teacup
Natural. Magical. Uva 2011 Seasonal Flush.
The Soul of the Herb
A really great day in Kiran
Peace or the postponement of conflict
DilmahTeaTea GastronomyUnbelievable Tea Experiences 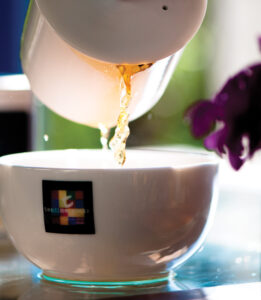 Over a breakfast of pancakes with roasted banana, maple syrup and crispy bacon beautifully paired with Dilmah Craighead Estate Seasonal Flush 2013, I read the comments of Michelin starred Chef Alexis Gauthier, on pairing.

“In the past we’d have looked for a sauvignon blanc. But it’s difficult to find something that doesn’t kill [the flavours]. Tea is more subtle than wine.”

He goes on to say that he matches each new menu with a different tea and that tea sales now comprise 30 per cent of drink revenues during lunch at his Gauthier Soho.

Relishing the palate cleansing effect and flavour harmony produced by the second if my breakfast tea – Dilmah Brilliant Breakfast Tea paired with traditional English Pork Sausages served with a marmalade glaze, I ponder the words of wisdom shared by another legend in gastronomy.

“People are drinking tea instead of alcohol at the end of a meal, so they are demanding a choice from restauranteurs.”

He predicts that “tea-pairing” – matching different teas to certain foods – “would become a bit of a fashion”, adding:

“And why not? Tea has such distinctive flavours.”

Finishing breakfast with a perfectly ripened papaya elegantly paired with our Dilmah Moroccan Mint Green Tea, the truth of Chef Gauthier’s words resonate. Tea is indeed more subtle than wine. Beyond the complex personality of each tea and the infinite variety that terroir brings to each, there is also luxury.

Each tea that is made in the traditional manner bears the fingerprint of Nature, in its flavour, aroma, colour, texture, and strength. That is the luxurious indulgence in tea, and it goes beyond the unmatched natural goodness, beyond the truth that tea dignifies food in insightful pairing and beyond the sensorial pleasure that tea offers the tea

Much as the mass market tea brands would like to us to include their cheap CTC blends within this definition, all that is special in tea comes not from ordinary tea – tea that is sold as a commodity – but from tea made in the time honoured tradition manner, that retains its identity by being unblended with tea from various origins, and which maintains its quality, flavour and antioxidants by being handpicked, carefully selected, and packed garden fresh at source.

Tea was always sophisticated, an elegant herb that is richly varied and naturally good for our health. It has been all that for 5,000 years. The renewed interest in tea comes from tea drinkers who are beginning to see that these is more to tea than the uninspiring portrayal of the noble herb by mass market tea brands.

There was an earlier time when tea was celebrated for its luxurious nature. That golden age of tea ended gradually as commoditisation afflicted tea like a cancer, brought on by the acquisition by multinational trading entities, of the family or owner operated tea companies. Nearly 100 years since that gradual blight began, it is an exuberant time for anyone who loves tea for the pleasure and goodness it offers.

As a family devoted to tea and to genuine innovation in tea, the future trends that are predicted are very familiar. For teamakers with a genuine commitment to tea, these are natural and logical directions; we have been enjoying tea gastronomy for over a decade and teaching it in our Dilmah School of Tea since 2009. As more tea companies follow Dilmah in bringing genuine innovation to tea we must guard against the cancer that brought tea to its knees. In the interests of tea drinkers, the millions of workers in the tea industry and its future, we cannot make the same mistake this time; we cannot allow businesses pursuing profit at the expense of quality and ethics, to hijack the future of tea. 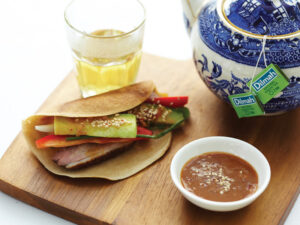 Extracts above refer to http://www.independent.ie/lifestyle/food-drink/diners-shun-wine-for-a-nice-cuppa-29169790.html