Trending Now
Photographer Yuriko Nakao’s perspective on Significance
Significant 70th and blessed 90th
It was never normal
A Centre for Hope
Three things to ponder on the 150th Anniversary...
The story of a Bocuse d’Or Sri Lanka...
The Spirit of Christmas
The Soul of the Leaf
The 21st Century ritual of High Tea
Tea Indulgence, the past, present and future
A man walks into a bar and ….
Friendship in a teacup
Natural. Magical. Uva 2011 Seasonal Flush.
The Soul of the Herb
A really great day in Kiran
Peace or the postponement of conflict
TeaTea & HealthTea IndustryUnbelievable Tea Experiences

Hearing the advice, earlier this week, of a learned marketer who proclaimed that tea – in the form that we know and love it today – will disappear in five years, and that tradition, love for tea are obsolete amongst a new generation that desires only instant gratification, it seemed that the 21st Century is no time for artisans in tea. My friend’s thesis was sound – with the relentless advance of Wal Mart, the insistence on speed and convenience amongst a generation that tweets and SMSs in preference to writing or even emailing, the teapot could well become an obscure accessory. Suggestive though the signs may be, predictions of a demise in tea in the style it has endured for millennia may be premature.

Tea began as a medicine and only then grew into a beverage. The protective, health benefits that herbalist emperor Shen Nung, is said to have discovered in tea have been proven by science 5,000 years later. Their significance for humanity is much greater today than it has ever been in the past. The potency of antioxidants in tea – in reducing the impact of stress, of protecting us from every chronic disease, from Alzheimer’s Disease, Parkinson’s Disease, its ability to strengthen the immune system, to fight cholesterol, and the naturally stimulating function of L-Theanine – are essential for a 21st century lifestyle.

Scientists are striving though to deliver these benefits in a more concentrated form, than in your cup of tea. The extract of tea antioxidants in convenient tablet form miss a very important aspect of tea though. As tea grew into a beverage, it became the source of comfort in solitude, of warmth in company and equally of luxury that neither coffee nor cocoa, wine nor whisky could offer. 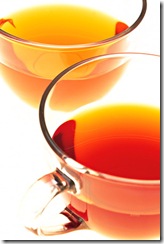 A natural herb, naturally produced to brew a tonic that offers healing and at the same time a palette of colour, an array of tastes, textures and aromas, has a style and indulgence that has no parallel. Science may succeed in synthesizing some of the elements responsible for the nutraceutical benefits in tea, into the unnatural form of a tablet. Those benefits – if they offer the same benefits when taken in isolation – will only offer a fraction of the goodness in tea for the true potency in tea lies as much in its ‘naturalness’ as in the intangible benefits from its calming and at the same time enlivening aroma, its gentle and simultaneously inspiring appearance, its incomprehensible variety, its gentleness or as often its majesty in taste. These are attributes bestowed upon tea by God, and there is no science that can distill the sophistication and indulgence in tea into a tablet.

If that were still inadequate justification for the continuation of the tradition of taking tea, consider the fact that in tea made in the traditional manner, there is the expression of an art that has been perfected over 5,000 years. Real Tea (although unfortunately not many of the commodity teas – CTC – in supermarkets today), is handpicked and from that first step, is nurtured through a style of manufacture that is unchanged for centuries. In that lies the third and possibly most compelling feature of real tea, for in your cup of tea is also the future of generations of people whose lives are inextricably linked to tea; the millions of tea pickers, planters, tasters and factory workers.

The real danger therefore lies not in the likelihood of the obsolescence of tea in its traditional form, but in the appearance of pretenders that may dilute real tea and its importance for future generations. Many people see tea as the highly sugared Iced Teas that have little relationship to real tea, instant tea – an insult, Iced Tea Lollies as obvious a misguided effort to profit from the heritage of real tea as a corporation can design. Yet amidst recession, the consumption of tea grew – and interestingly it grew most in the speciality tea segment, suggesting that the new generation wants tea, and seeks better tea. The appreciation of leaf tea – served in the traditional teapot – is growing, and as people overcome with the blandness of materialism, seek more profound fulfillment, tea offers the same serenity, energy, vitality and comfort as it has done for generations. Of course there is much to be done for the story of real tea must be told, and the wonderful heritage of tea, be applied with authenticity, ethics and expertise to offer more tea drinkers the possibility of indulging in the divine herb. That may take more resources than a family company like ours can muster, but more passionate tea people will surely join the fold as it becomes apparent to corporations that the headlong rush towards extracting profit from tea at any cost, eventually yields diminishing returns.

I can only assume that my friend, overcome as he was with consumer research and trend reports, does not drink tea. An ancient Japanese proverb observes that, “If man has no tea in him, he is incapable of understanding truth and beauty.”

In conclusion, let us brew a cup of fine tea, taking care to appreciate the tea as the leaves unfold and yield their delicious infusion, whilst thinking of more sage words;the suggestion of Thich Nat Hahn, Vietnamese monk, peace activist, poet and teacher: “Drink your tea slowly and reverently, as if it is the axis on which the earth revolves – slowly, evenly, without rushing toward the future.”

The beverage tea, from the top leaves of the plant Camellia sinensis is one of the most widely used beverages in the world, second only to water. Black and green tea have mostly similar actions. The active components are polyphenols, mainly epigallocatechin gallate in green tea, and the tea leaf polyphenol oxidase mediated oxidation to oolong and black tea, yielding other polyphenols, theaflavin and thearubigins. There is 40-50 mg caffeine in a 160-ml cup of tea. The chemopreventive effects of tea depend on: (1) its action as an antioxidant; (2) the specific induction of detoxifying enzymes; (3) its molecular regulatory functions on cellular growth, development and apoptosis; and (4) a selective improvement in the function of the intestinal bacterial flora. The oxidation of LDL cholesterol, associated with a risk for atherosclerosis and heart disease, is inhibited by tea. Many of cancers are caused by lifestyle elements. One is cigarette and tobacco use, leading to cancer in the oral cavity, esophagus and lung, inhibited by tea. Mice administered a tobacco nitrosamine, 4-(methylnitrosamino)-1-(3-pyridyl)-1-butanone (NNK), developed significantly fewer lung tumors than controls when given green tea or its major polyphenol, epigallocatechin gallate (EGCG). Tea suppressed the formation of 8-hydroxydeoxyguanosine (8-OHdG), a marker of oxidative DNA damage, in the lung DNA of mice given NNK. Gastric cancer, caused by a combination of Helicobacter pylori and salted foods, is lower in tea drinkers. Western nutritionally-linked cancers of the breast, colon, prostate and pancreas can be inhibited by tea. The formation of genotoxic carcinogens for these target organs during the cooking of meats, heterocyclic amines, and their effects were decreased by tea. Tea inhibited the formation of reactive oxygen species and radicals and induced cytochromes P450 1A1, 1A2 and 2B1, and glucuronosyl transferase. The higher formation of glucuronides represents an important mechanism in detoxification. The developmental aspects and growth of cancers through promotion are decreased by tea. The regular use of a widely available, tasty, inexpensive beverage, tea, has displayed valuable preventive properties in chronic human diseases.