Trending Now
Photographer Yuriko Nakao’s perspective on Significance
Significant 70th and blessed 90th
It was never normal
A Centre for Hope
Three things to ponder on the 150th Anniversary...
The story of a Bocuse d’Or Sri Lanka...
The Spirit of Christmas
The Soul of the Leaf
The 21st Century ritual of High Tea
Tea Indulgence, the past, present and future
A man walks into a bar and ….
Friendship in a teacup
Natural. Magical. Uva 2011 Seasonal Flush.
The Soul of the Herb
A really great day in Kiran
Peace or the postponement of conflict
Facts of TeaTea 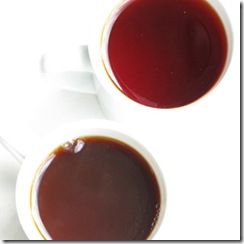 Two mugs of tea, made using the same Dilmah Single Origin Pure Ceylon teabag, brewed for the same time in identical porcelain mugs and tasted seconds apart in the same conditions – yet entirely different. One has brightness, depth and strength, with the wonderful balance of richness and flavour that is the hallmark of Ceylon’s Dimbula region orthodox teas. The other, pungency but without depth, and strength without the diverse notes that formed the more complex character of the other tea. In appearance, they are similarly different to each other – the former a bright burgundy, with a tinge of orange around the edges where the tea meets the white porcelain, the latter a muddy brown, with a ‘skin’ floating on the surface.

The culprit? Water. More precisely London water. The dramatic difference in the two teas which should in theory be identical, as they were made from the same tea and brewed for the same time (3 minutes) is shown in the image that appears here; depending on your monitor the difference in brightness, colour and clarity may or may not be evident, but it is not only in appearance for the taste is also dramatically different.

The ‘skin’ or ‘tea scum’ that I mentioned is not very attractive to look at and does stain the chinaware although it is not harmful. It is the result of the high molecular complexes which are formed due to the influence of calcium and bicarbonate ions at the liquid water interface. Very little scum is formed on a cup of very strong tea as the acidic tea polyphenols themselves partly neutralize the bicarbonate ions.

The scum can be removed by filtering the calcium ions, or by adding acids to convert bicarbonate ions to CO2. The best option though is not to allow the scum to form at all, and that is by using good water. The importance of water is more often than not, completely underestimated.

If you live in Sweden, New Zealand or Scotland – this post is not for you! The quality of water in these places is generally so good, that a very good and satisfying brew can be achieved using water from the tap. In many places – London as the example illustrates, Adelaide where water is very ‘hard’, Singapore and many other cities where water is recycled, high in minerals and calcium, or ‘hard’ – water can completely change the quality of your cuppa, even from an outstanding tea.

Hard water is especially catastrophic for a speciality tea for the complexity and sophistication in an outstanding tea is retarded by poor quality water. Typically most teas that are brewed in hard water brew rapidly with strength and colour developing in less than a minute. The colour though is usually a muddy brown or black rather than the more desirable tones. Only slight variation is evident in the appearance of teas brewed in hard water, whether a light and typically golden English Afternoon, or a strong and typically mahogany coloured Ceylon Supreme. Both appear dark, and muddy brown, usually with a ‘scum’ on the surface.

Good quality spring water is the ideal – in the example above, I used a fairly affordable spring water (Tesco Ashbeck Mountain Spring Water, sold at less than 1 Sterling Pound – or US$1.60 – for 5 litres, the equivalent of 20 large mugs of tea). Make sure it is still, and not sparkling or Carbonated. Other examples of good spring water are Vittel, Evian, Highland Spring – with a plethora of others. As an option, if the small cost of good water is an issue, is to use a water filter such as a Brita which uses activated carbon and an ion exchange filter to reduce hardness, remove heavy metals, chlorine and impurities from the water.

Once you get the water right, remember the rest of the Golden Rules for a perfect cuppa …

…. and then there is tea (green tea for the first timer)