Trending Now
Photographer Yuriko Nakao’s perspective on Significance
Significant 70th and blessed 90th
It was never normal
A Centre for Hope
Three things to ponder on the 150th Anniversary...
The story of a Bocuse d’Or Sri Lanka...
The Spirit of Christmas
The Soul of the Leaf
The 21st Century ritual of High Tea
Tea Indulgence, the past, present and future
A man walks into a bar and ….
Friendship in a teacup
Natural. Magical. Uva 2011 Seasonal Flush.
The Soul of the Herb
A really great day in Kiran
Peace or the postponement of conflict
DilmahEthicsTea Industry 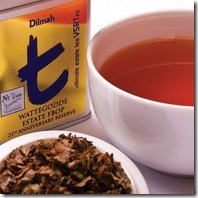 An advertisement in an inflight magazine on a trans Atlantic flight exclaims, ‘Experience the greatness of our new tea lattes’. Beneath, the advertiser earnestly underlines its claim, ‘ Yes, we did say greatness.’ And then it shows a photograph of a cup – nice, off white on green, probably porcelain – filled with a foamy, whiteness. At first glance a teaman would be forgiven for assuming that this was a case of a design error – using an image of a particularly bland cappucino instead of tea. It takes considerably less than the 7 hour flight to come to the startling realisation that this is no mistake, but the expression of a phenomenon that stalks almost every artisanal product.

In the same way there is good and evil, there is real tea and ‘ordinary tea. The difference is not easy to explain in words – it is a comparison of a finely handcrafted 17th century French Dining Table with a foldable plastic camping table from Wal Mart. Metaphors have their limitations though and the difference between real and ordinary tea goes much deeper, but it would require the metaphysical allusion of John Donne, combined with the descriptive power of Solzhenitsyn to convey exactly how deep. That’s not to say that real tea can only be appreciated by the trained palate – only that the gulf in taste that exists between the two forms of tea is complex, whilst easily discernible on the palate.

The phenomenon I refer to is the evolution of two forms of quality in tea – one presumed, and the other real. The former is a pretence that the pretenders themselves have come to believe – a fluffy and vague notion of quality in tea, which has given rise to a rash of tea experts including one from South America who claims to be one amongst less than ten of the finest ‘noses’ in tea. This genre in tea, is peppered with fake concepts that offer tea drinkers an illusion of quality. The tea latte in the ad is one of those.

Such a trend may normally be dismissed as a marketing gimmick. I refer to it as a phenomenon though because the vast resources that have been deployed to reinforcing this pretence has got even the practitioners hooked into a cycle of ever increasing delusion. Take White Tea; earlier in this blog I shared images of the real and the pretence – the latter was picked off a supermarket shelf in Sydney. I discovered the same pretence in Paris, not quietly hidden in some doubtful corner shop, but proudly heralded as the greatest thing in tea.

Getting back to ‘greatness’ the body copy in the ad continues, “Made with only the finest ingredients, these delicious drinks are prepared to perfection and served with the utmost care – one cup at a time…”. Clearly written by some young copywriter who has probably never experienced perfection in tea. Change the picture and the reference to tea and it could apply to a smoothie. One other reason this trend cannot be dismissed as a cheap gimmick for increasingly desperate marketers is that stepping into any of the thousands of Starbucks or equivalent coffee shops in the US and that latte is what you get, described in similarly eloquent terms, doused in caramel or whatever flavour you may select, cloyingly sweet and nothing like the ‘real’ genre in tea.

The point is that it is what many people know as ‘tea’. Even in England, a stone’s throw from Buckingham Palace, a series of noisy, well patronised coffee shops offer tea in latte and other guises. That’s OK you may say, give the consumer what she wants. Not so. A new generation of tea drinkers is evolving around the health benefits in tea. They fuelled the vertical takeoff of the Ready to Drink Tea category. What the did not and still do not know, is that in virtually every instance the ready to drink tea contains so little tea, and so much sugar, that they may as well guzzle cola. yet ready to drink tea is so successful that it is spawning sub-categories, most recently tea iced lollies. The only common thread with tea is the name; try the ‘Red Tea’ (Rooibos) and ‘Black Tea’ ready to drink products from any major brand to see what I mean; they have the same, sickly sweet taste that is so distant from reality to be a pretence.

We are not purists. Tea is a perfect base for culinary innovation – visit the Dilmah t-Bar at the Hilton Colombo and you can savour tea based cocktails, mocktails, ice cream tea shakes and sometimes even tea infused chocolate. There are two important differences here – the taste of tea remains dominant in whatever combination the tea in presented in, and these teas are presented as they are – not as ‘greatness’ but as culinary combinations. There are tea experts who wax eloquent about flavoured teas, and their aroma and flavour – that’s not the tea though, and that important clarification is critical for tea drinkers to understand the truth about tea. Failing to do that will only mislead, and sacrifice the greatest opportunity that the industry has to use knowledge and education in tea to help growers, and to grow demand for artisanal boutique teas. That is to bring the innovation in tea to genuine innovation, rather than just the addition of flavour or herbs.

True greatness in tea comes from the sophisticated beauty of the notion of terroir, with tea grown on different estates, at different elevations, varying in flavour, strength, aroma, colour related to the soil, rainfall, sunshine, and general climate of the area. Greatness in tea is the expression of that sophistication in a spectrum of tea, each with its personality, each linking with the mood, occasion and unique preference of the tea drinker. The truly great teas, offer an experience that is much more than personal, for they are rich in natural goodness, untainted as they are by various additives, they are healthy but also pure and natural. They offer even in their preparation and in being good enough to withstand the tea taster’s scrutiny on the eye, nose and palate, they extend the pleasure to tea from taste to the golden, ruby red or deep mahogany brown appearance, and the wonderful aromas of different teas.

Greatness goes beyond taste though for it requires that the tea measure up to its 5,000 year history – each tea, when produced in the traditional, orthodox manner, bears this richly satisfying personality of which taste is only the final expression. A truly great tea must therefore stay true to this tradition; most of the pretenders are made using the cheaper, more recent and vastly less complex CTC process. A great tea must also be ethically produced, for the exceptional taste of the tea to go beyond the palate to the soul. The tea industry globally is dominated by a handful of transnational corporations; their orientation is profit, and ‘great teas’ defy that criteria for they are individual, not mass produced nor suitable for selling in stores at a discount. ‘Great’ teas are different for they celebrate their heritage, and in doing so reject the trader induced sensitivity to price. At 5 cents a cup when you buy ordinary tea in supermarkets, the idea of paying twice as much (10c) for a great tea that is great in taste, and in ethics, should not be unacceptable to tea drinkers.

The ad that spurred this tirade was from a coffee company. It is unfortunately the uninformed and commercially oriented efforts of the coffee companies to supplement flagging sales and transplant the same formula for success to tea, that has led to the different interpretations of greatness. The success of coffee generally, was due to the efforts of a handful of passionate coffee people, like Dr. Ernesto Illy, Luigi Lavazza and others, who loved coffee and desired to share that love with their customers. We are no different as teamen. My father devoted his life to tea and recently celebrated 60 years in tea – that’s longer than most people would work in a lifetime. We are passionate about tea, not only for the privilege of sharing the pleasure and indulgence in real tea with a generation that needs the goodness in tea more than ever, but also for the power that genuinely ethical trade in tea offers the producers.

From that standpoint, the definition of ‘greatness’ as nice packaging, herbs which are not tea, lattes which are frothy, milky and sweet with no taste of tea, white tea that is green, does grate a little. If you would like to try one of the true greats, have a taste of our 21st Anniversary Reserve, Wattegoda Estate Leaf Tea. But please remember, no caramel topping.